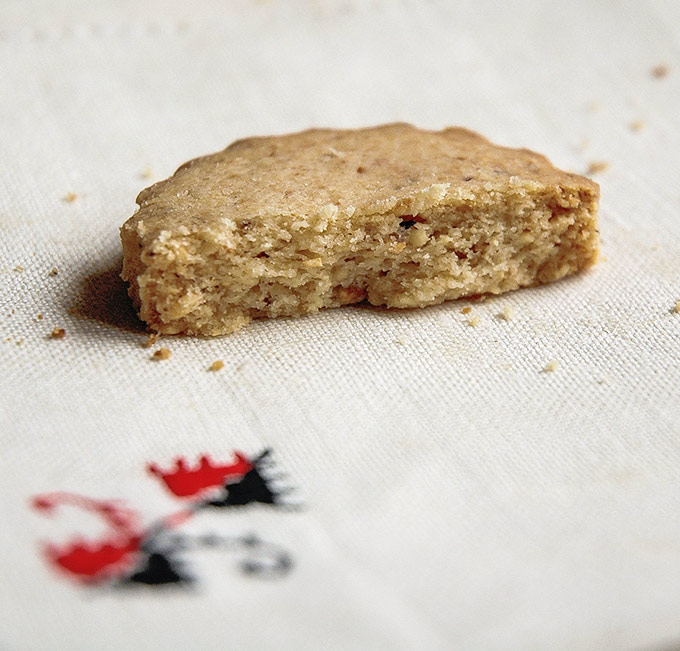 This recipe comes from a recipe notebook my grandmother kept. A few days ago we tidied up the attic (some of the boxes from our last moving are still there… already for 9 years!), and D. found it when I thought it had been lost ages ago. So to celebrate this reunion, I decided to try one of the recipes (for the first time!) and then use the product for my Christmas gifting…

Mantecados are a very typical Christmas sweet in Spain. Mantecado means made of manteca, that is, pork lard. This sweet is traditionally made with lard, ground nuts, sugar and flour. According to the web Sabor mediterráneo (Mediterranean flavor):

Between September 1st and the beginning of December, in the Sevilian town of Estepa 20 million kilos of mantecados, polvorones, alfajores, and roscos de vino are made and sold… Because regarding mantecados, Estepa is the same as Jabugo in respect to jamón or Jijona in respect to turrón. The pastry tradition of Estepa originates from the Arabs, but the tradition regarding mantecados is a lot more recent, possibly dating from the 15th or 16th century, when the inhabitants of the area sought to put all the lard surplus to good use. This lard derived from the pigs that were slaughtered in the winter. My grandmother calls these little biscuits «hazelnut pastries» in her notebook, but they are suspiciously similar to mantecados… Here’s the recipe:

Mantecados de avellana (Hazelnut mantecados)
Yields between 25 and 35, depending on the size of the cutter. My grandmother didn’t give any direction on the type of sugar used, oven temperature, baking time, how to knead the dough… typical from somebody who knew her way around in pastry making. Unlike me. The first time I tested the recipe I concluded that the sugar had to be powdered, because otherwise you notice an annoying crunch with every bite.

First shell the hazelnuts. Then roast them in the oven, preheated to 120 ºC, 20 minutes is enough in my case though this depends largely on your oven. Watch the hazelnuts closely as they can burn easily. Don’t let them brown excessively. When the skin is cracked, take them out and leave to cool. They can be easily shelled just by rubbing them between the palm of your hands. Throw the skinned hazelnuts in a food processor and grind them. Don’t overdo it or the mixture will be too oily. We don’t want them to release their oil, we’re interested in a somewhat coarse meal. Then mix the hazelnut meal, the sugar and the flour. Melt the pork lard. I skipped the baking powder and the oil, I think they’re not necessary at all. Pour the lard over the rest of the ingredients and mix by hand. The dough may seem very crumbly at first, but after a while, when the lard is absorbed by the solids, you have to be able to make a lump of dough that stays amalgamated by clenching a portion of dough in your hand. It’s difficult to explain what the texture needs to be to someone who’ve never eaten mantecados. The dough has to keep together but stay somewhat crumbly at the same time. It may be necessary to add some more lard if the dough is still too crumbly after say 5 minutes. Add it little by little. Then roll the dough to 1 cm thickness (I made them thinner… careless). The edges can crumble, but they can be compacted by hand. Then choose a simple shaped cookie cutter, a small glass or something similar. Don’t use complicated shapes. The first time I tried this recipe I used a very lovely and tiny moose cutter. The biscuits looked good, but all the moose’s legs ended up amputated… these biscuits are too fragile and delicate. What a horrible massacre. One minute’s silence for the moose’s legs… Well then, cut the shapes and transfer them to a parchment paper or a silicone sheet. Put it in the fridge at least half an hour for the lard to set. Preheat the oven to 180 ºC. Put the mantecados in the oven and bake for 10-12 minutes in a convection oven. Watch them closely to prevent the edges from burning.

When they are nicely browned at the edges, take them out and let them cool on a rack. Sprinkle with powdered sugar when cool (I didn’t do it because they were sweet enough for me, but it’s a matter of personal taste). The smell of hazelnuts permeates the whole house… And they are incredibly easy to make. With this recipe I want to wish you all Merry Christmas and a Happy New Year and all those things… hope you’ve been good and Santa brings you all you asked for… I love to watch movies at Christmas and besides some good ol’ Spanish classics, I always go back to this one all-time classic… don’t you think it’s time to revisit it?