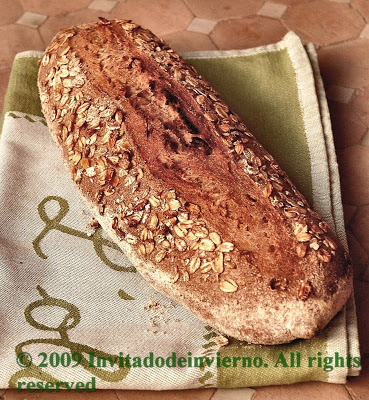 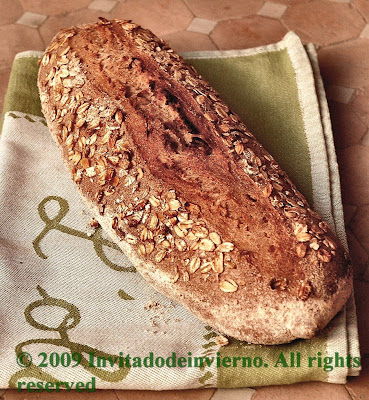 I’m in the mood for baking bread. I’ve taken up again on sourdough and feel like practising different techniques. I’ve got the impression that my stand-mixer doesn’t bring out the best in the dough. I decided to hand-knead this bread, French method here. As I always end up with absurd amounts of sourdough because I refuse to throw away a single bit, the recipe I used is as follows:

Sourdough bread with rye and spelt

All these flours are organic and come from Rincón del Segura. I added the maple syrup on an impulse, I’m hooked lately, it’s deliciousssss.

To add gluten… well, if rye and spelt flours have less gluten than white wheat, why not supplement with some added gluten? I’ve found some references on adding gluten to rye breads, but I’m not sure of the ratio. I’ve got to make some tests.

Back to my point. Mix all the ingredients (I did use my stand mixer for this), except the salt. Leave it to rest for 10 minutes (autolysis) and then add the salt. Integrate the salt and put the dough on the counter. Be rough on the dough «a la française» at least during 10 minutes (the guy in the video talks about beating it 600 times), shape it into a ball, put it into an oiled bowl, cover with plastic and leave it in the fridge overnight.

Next morning take the bowl out of the fridge and let it warm up to ambient temperature. Rye and spelt dough doesn’t rise as much as white wheat dough, at least mine didn’t, so don’t expect it to double in bulk. Shape the dough as you like, I made bâtards and heat up your oven to 250 ºC (480ºF). I usually leave the shaped dough to proof on an oven tray with a floured cloth and inside a plastic bag. This is a recommendation by Peter Reinhart. After one hour more or less I put the bread in the oven with my mock wood peel on my mock oven stone… and then sprayed it three times with water during the first 5 minutes. For a super rustic look I had sprayed the bâtons with water and sprinkled some rolled cereal just before putting them in the oven. They baked for half an hour, more or less, but I always check for doneness with a thermometer. According to Peter Reinhart the inner temperature must be somewhere around 95 ºC (200ºF) when properly baked, at least for white bread. And then out to cool down on a grid. 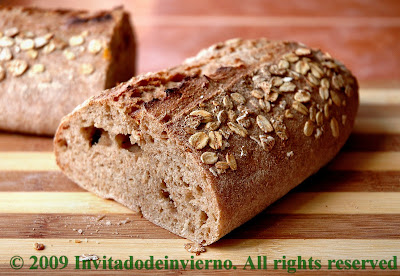 In the picture it can be seen that in spite of the dense crumb characteristic of rye and whole breads, my bread had some big holes in it. I don’t really know where they came from. The bread had a delicious flavour. It was a great success in some family meal and there wasn’t a single crumb left.