Have you ever heard about Padrón peppers? There’s a saying that goes Pimientos de Padrón, unos pican y otros no (Padrón peppers, some are hot and some are not). This refers to the fact that most of Padrón peppers are sweet and flavorful, while only a few of them can be quite hot, which makes eating them a culinary Russian roulette. And not only a gastronomic pleasure, but a lot of fun too.

These little morsels of vegetable goodness originate in the northwestern region of Galicia, around the town of Padrón, hence their name. I have some kinfolk living there, so I visit often and have the chance to eat them at the local bars… delish. Padrón peppers are usually eaten fried in olive oil and with a sprinkle of coarse salt that not only enhances their flavor, but adds a nice crunch. No need for any other garnish, simplicity and quality food at its best. 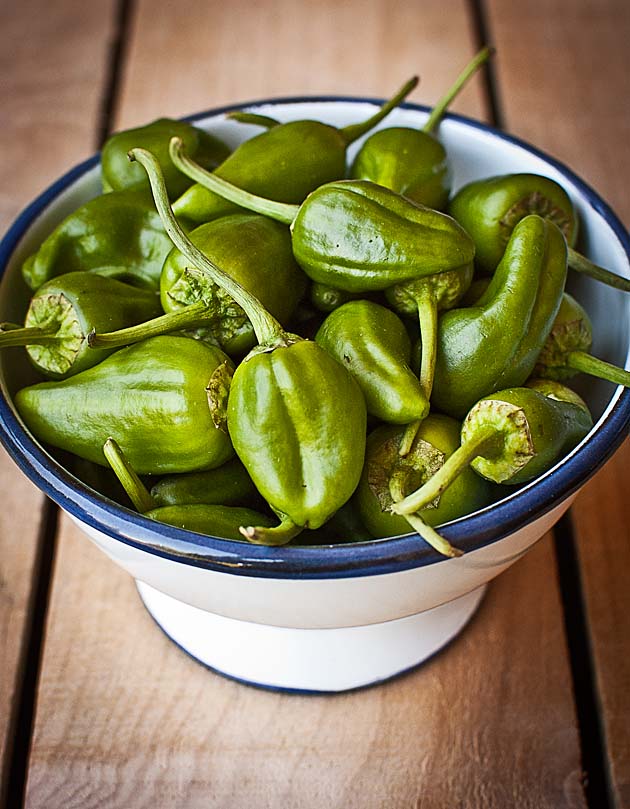 For eating the peppers, you’ve got to hold them by the stem, bite into the flesh and pull, leaving the stem intact. You’ll end up with a nice collection of little stems on your plate. Fried Padron peppers are superb served with a chilled fruity Galician white wine like Ribeiro or Albariño.