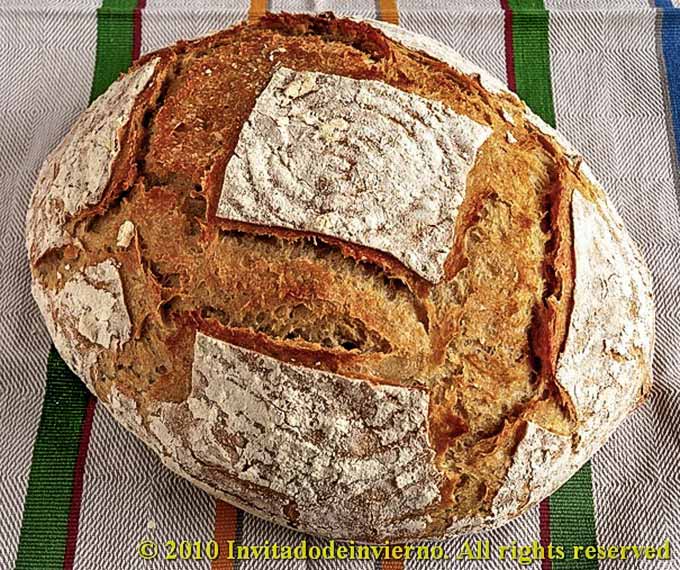 Those of you out there who are among the followers of the Holy Sourdough know that the only rite of passage that allows you to qualify for a gold-plated bread-scoring tool is to make a San Francisco sourdough bread… I admit I had always wondered, somewhat skeptically, if San Francisco yeastie beasties would be much different from the ones in the Spanish plateau (the rain in Spain doesn’t stay mainly in the plain…). But I’ve been lucky enough to get some of these bugs from my generous friend Bea… so that I could check myself. I haven’t reached a definite verdict though.

Here’s what baker Peter Reinhart says about the bugs and San Francisco sourdough:

(…) a wild strain of yeast called Saccharomyces exiguus is used to make sourdough bread, as opposed to S. cerevisiae used in regular breads. But the complex sour flavor is not created by the wild yeast. Other bacterian organisms, specifically lactobacillus and acetobacillus, create lactic and acetic acids as they feed off the enzime-released sugar in the dough, and these are responsible for the sour flavor. San Francisco sourdough bread, for example, has a particular type of local bacteria called Lactobacillus sanfrancisco (…) that gives this bread a different quality, more sour with a thicker crust, than any other wild-yeast bread made in other parts of the world.

If Reinhart says so… The peculiar flavor that this sourdough imparts comes from one of those bacterias, from the lactobacillus type. Well, I only know that I have baked two breads with this sourdough so far and either I’ve finally learnt to bake decent bread or this sourdough is really special. Both breads were wonderful, with a delicious flavor that caused them to disappear in no time. The recipe I used is nothing special: And being that I am a studious little girl, I’m more than willing to try this sourdough again just to check if its flavor and aroma are really special or not… as many times as needed. Sorry, I must be going, I’ve got some baking to do. Bye. I almost forgot! I’m sending this bread to Susan’s Yeastspotting… don’t forget to check it tomorrow for a weekly showcase of breads!