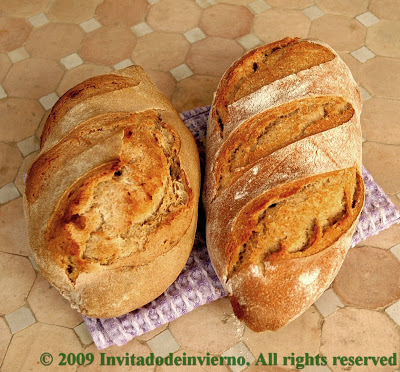 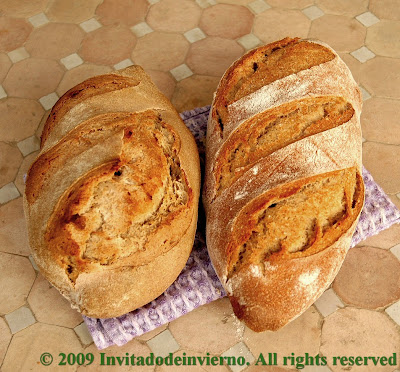 I’m still in the mood for baking bread, experimenting. Now with a semi-whole rye sourdough, originally developed from some sourdough my friend Lourdes, who lives in the Netherlands (dutch yeasties!), kindly brought me and adding only white wheat bread flour, everything from Rincón del Segura. And to use up some leftovers, with natural cider I had in my fridge for ages instead of water. 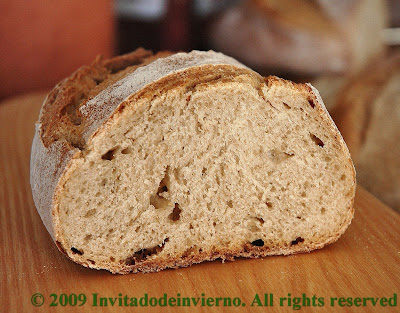 I used the same method as in the previous post, so I won’t repeat it. The only difference is that I baked one of the bâtards inside my dutch oven and the other one outside, just on the tiles I have in my oven for baking stone. And as it can be seen in the picture both bâtards have a different look in spite of them having undergone the same process and having almost the same size. The bread baked in the dutch oven is the right one. Besides growing more symetrically, the crust had a more uniform and nice color, toasted and orange, instead of brownish. The dutch yeastie beasties liked my dutch oven… Both breads had the richest smell of cider in spite of it not being very evident in their taste. A delicious bread, with a crispy crust, with the scores nicely open and showing gluten fibers. Maybe the bread could have had a bigger oven spring even though the initial dough was not very liquid. No doubt I will use the dutch oven again for baking bread, it’s a pity my oven is not big enough to fit the two dutch ovens I have.