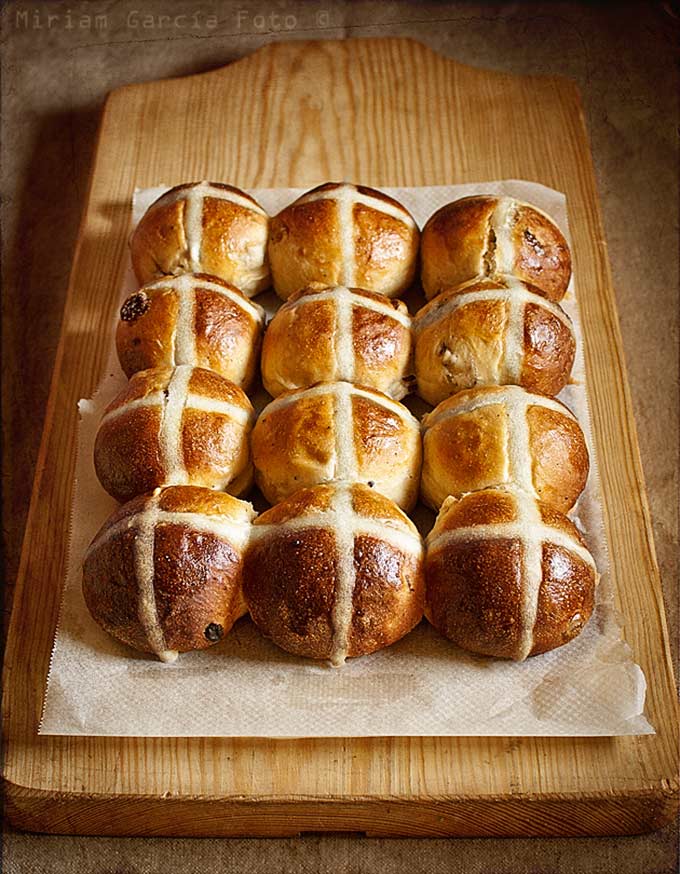 These fluffy hot cross buns are traditionally eaten in the United Kingdom to celebrate Easter. The recipe comes from a course I followed, already some years ago, on festive breads taught by Paul Merry. Mr. Merry teaches bread baking at his school, Panary, in Dorset. I would not refuse to spend some time there. Donations admitted.

Mr. Merry says about the buns:

In Medieval bakeries it was common for the bakers to place a cross on the loaves in order to repel any evil spirits which might be lurking about. There was great fear that evil spirits might overcome the bread in the oven and prevent the magical rising. After the practice was virtually banned in the 16th century as being «popish», the cross was allowed to remain as the symbol for the Easter bun.

A strange law in the Puritan period ensured that rich spicy fruited breads were allowed to be made only during festive or holiday periods or at public burials, and by the 17th century the «hot cross bun» was an established Easter ritual. The baking day was the Thursday before Good Friday, and unlike modern commercial practice, the bakers only made them on the one day.

Imprimir
Preparación
6 horas
Cocinado
30 min
Total
6 horas 30 min
Spiced buns typically eaten in Easter, inspired on Paul Merry's recipe
Autor: Miriam García
Tipo de receta: Pastry
Cocina: British
Raciones: 32
Ingredientes
Preferment
Dough
Piping mix for crosses
Instrucciones
Preferment
Dough
Notas
With this amount of ingredients, the yield is 32 buns of approx. 60g. * These buns are heavily spiced, in a very medieval way. You can use the following spices, to your taste: nutmeg, allspice, cinnamon, ginger, cumin and cloves.
** If you want to give them some glazing just after coming out of the oven, there are various options:
Boil 280ml of water with 300g of sugar until dissolved. Add 15g powder gelatin and brush the buns while piping hot.
Heat 4-5 tbsp apricot or plum jam with 1-2 tbsp water. Strain the mixture and use the liquid to brush the buns while piping hot.
Wordpress Recipe Plugin by EasyRecipe
3.2.1753
Dough ratios: 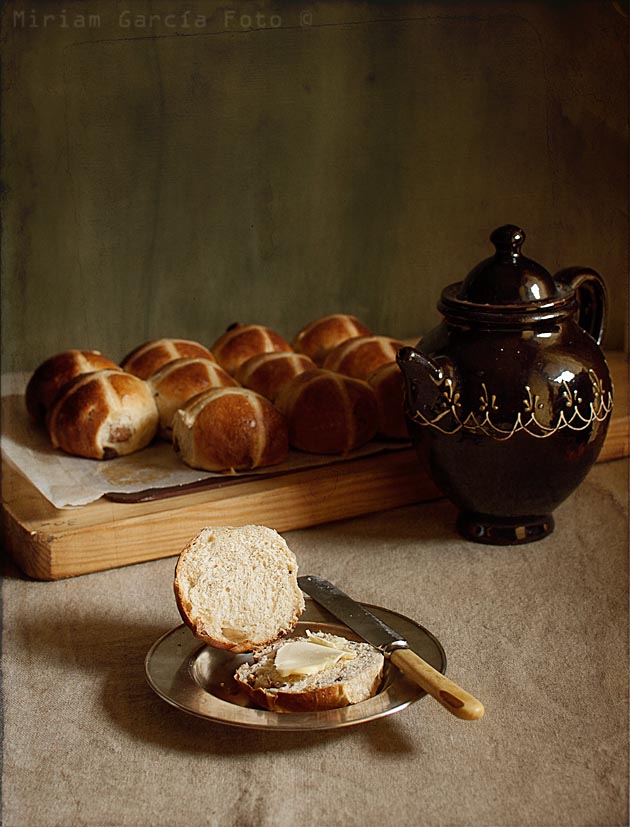 Even though the hot cross buns are best freshly made, they perfectly last a couple of days stored in a plastic bag. And if you find them a bit past their prime, slice them in half and toast them. Delicious with butter and jam.