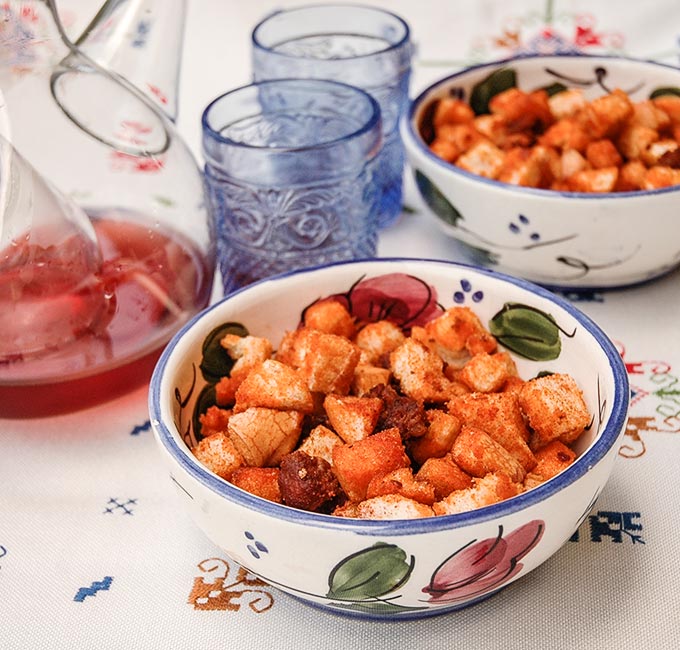 I had been feeling like making migas for some weeks already, so I was very happy when charming Mel from Bouchon for 2 asked me to put up a guest post for her while she’s on vacation (lucky girl!). She wanted a Spanish family dish and I couldn’t have found a more traditional one than migas. Thanks, Mel!

First of all I shall explain what migas are. Migas means crumbs, literally. To prepare them you just need a hunk of stale bread, some charcuterie, cloves of garlic and olive oil for frying. It was formerly shepherd’s fare, something easy to prepare for the shepherds while up on the mountains, and also popular among peasants. Everybody had a piece of bread and some garlic and chorizo or ham to add. And apparently there is a version of migas in every region of Spain, which is not too frequent. They were eaten everywhere. And I warn you: this is not a diet dish. It has lots of olive oil and animal fats and I won’t apologize for that… that’s why it’s so delicious. It was perfect for warming you up in the cold winter nights, up on a mountain hut.

It was my grandmother María who taught me to make migas. She was my paternal grandmother and she lived with my family till her death, some over 20 years ago. She was a very good cook, especially for pastry. She had been born in the Philippines while the country was a Spanish colony, her father being an army officer. She returned to Spain with her family when the Spaniards were expelled from the Philippines by the Americans (no hard feelings…) in 1898. Within a few years she unfortunately lost her parents and ended up in a religious boarding school for orphans in Aranjuez, where she stayed until she was 18. In the photo she’s the blonde girl in the foreground, tightly holding the doll… wasn’t she cute? I wonder where she learned to make migas, I never asked her… As far as I know there are two main types of migas: diced and pulled. My grandmother used to make the diced type. According to the traditional standards, the dices must be chickpea-sized. The best bread for migas is the Spanish peasant bread, with a very dense crumb. The very open crumb of baguettes or ciabattas is not good for migas. And normally stale bread a day or two old is used. Remember migas is a poor man’s dish… this makes it just perfect for the current crisis. I don’t measure anything when I make them, but I’ll try to figure the amounts: Well then, are you ready to start? Pick a nice hunk of stale bread and dice it carefully. I never get to make the dices as small as a chickpea… I’m not a skilled miguera, but I manage. Put the diced bread in a large bowl. Then sprinkle the bread with water, enough to slightly moisten it. The purpose of this is to soften the bread, remember migas are supposed to be made with sometimes very dry bread. Sprinkle the salt and turn them around to evenly distribute the salt. Do the same with the pimentón. Then cover with a damp cloth and leave to rest overnight.

By the way, I remember one family meal, with all my in-law family as guests, when I cooked migas for first course and a goulash-like stew for second course. I mistook the hot paprika for the sweet… on both courses… That day I had the evidence of how very well-mannered they all are… they still talk to me.

To prepare the migas the next day, pour 6-8 tablespoons of olive oil in a deep frying pan and put it on medium heat. Cut the garlic cloves in half, there’s no need to peel them. Fry the garlic until lightly browned, then discard. The purpose is to flavor the oil. Then add the crumbled chorizo, the ham and the bacon. Stir-fry till they’re almost done, the oil will be nicely colored, then tip the bread on the pan. Toss and turn around for the bread to thoroughly soak the oil. They will start to turn nicely red because of the paprika and chorizo drippings… Go on tossing for 3-4 minutes, depending on the heat. The migas should be lightly toasted and crisp on the outside, while they should remain soft in the inside… yes, that’s the key to making good migas, my little children… Serve the migas on a beautiful earthenware dish, while warm, and distribute them with a large wooden spoon… this is just for the sake of authenticity. You can add some grapes to the migas too, although I don’t remember my grandmother doing it. This was very typical in the wine growing regions, but then they are called migas de vendimia or grape harvest migas. I love the contrast between the roughness of the migas and the sweetness of the grapes. Some other day I’ve got to try to add some pomegranate… it must be an interesting addition. And also you can serve the migas in small bowls or portions for a very tasty tapa… yum!