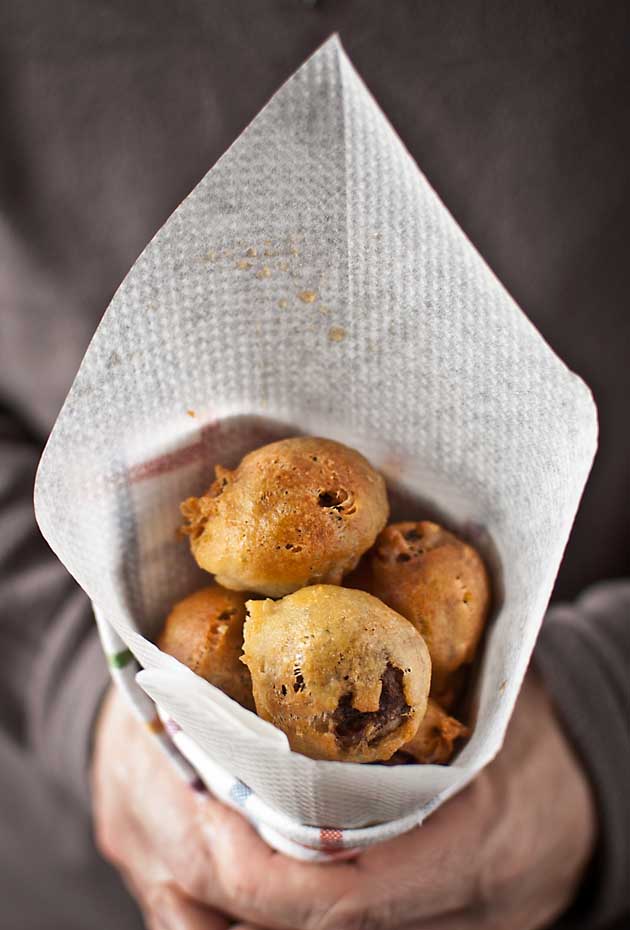 This entry is a humble homage to a good chef, who’s recently died at a too early age… Three-star Michelin chef Santi Santamaría was a Catalan chef famous for his restaurant Can Fabes, close to Barcelona. When I learned of his death some days ago, I immediately thought of making one of his recipes, being that I have a couple of his books. But as unity is strength, I decided to participate in the common homage effort started by the Catalan blog De cuina, to get a lot of blogs to cook a Santamaría recipe on the same day. And the initiative was a success. I had been craving for some dish with morcilla, the typical Spanish blood sausage or black pudding (don’t sneer), for quite a while, so when I saw Santamaría had a recipe for some wonderful tapa of morcilla beignets my search was over. And the result was well worth the effort.

First to the winner of the CSN giveaway! The lucky winner of the $75 gift code is Prerna, from the very lovely blog Indian Simmer! Congratulations, Prerna, I hope you buy something to help you create even more delightful recipes for us to enjoy. I guess morcilla is one of those things that can make you cringe when haven’t grown up with it. I admit the color is not very inviting… humans don’t really eat many black foods. In Spain morcilla is a soft sausage made with onion, rice, pork lard, pork blood, salt and quite some spices such as pimentón, pepper, origan, cumin and aniseed in varying amounts. I don’t see why this could be more disgusting than having fish raw, or eating slimy creatures like octopus. Or sea urchins. Or even moldy blue cheeses. It’s a cultural thing and an acquired taste. And a chance for the ones that have never tried it to be a little more… adventurous (maybe I should ask myself whether or not I am adventurous foodwise before advising the rest of the world to be… I still fill nauseated at the memory of Anthony Bourdain gobbling down a snake heart). I have taken the liberty to modify the filling slightly, eliminating the bread soaked in milk (something I’ve never really liked in meat balls) and egg. I found my Burgos morcilla unctuous enough to perfectly bind the filling mixture. And I had no desire to lighten the fierce flavor of the sausage, which I love. I added a handful of pine kernels, which to my taste combine wonderfully with morcilla. I am including the directions for the original recipe anyway, in case anyone prefers it that way. And the formula for the frying batter was superb, tasty and unbelievably crispy, undoubtedly a keeper because it stays crisp for a long time. Morcilla beignets
Yields 25-30
For the filling:

For the frying batter: You see, Mr. Santamaría, we will always have your recipes.