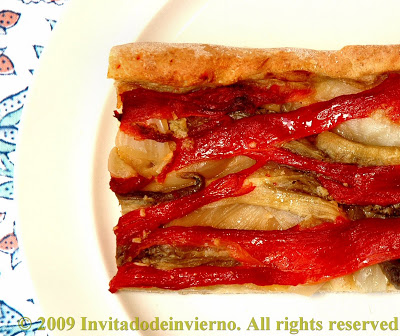 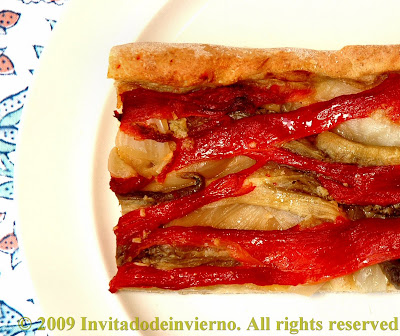 I started to bake «cocas» after buying my Thermomix ages ago… it doesn’t matter how long, following the accompanying recipe book where only a slight fermentation is used. But now I’ve prepared it with sourdough. It’s a long time since I last prepared a «coca» and I felt like eating it again, so I thought it would be a good idea to make it completely catalan and spring-like with a good «escalivada», wooonderful!

Cocas are pizza-like pies typical from Catalonia and the Eastern Mediterranean coast of Spain, including the Balearic Islands; I don’t know the precise latitude where they stop being baked…. If there’s someone from Murcia out there, show up and tell me if some similar pie is baked also there. I can’t wait to know… please teach me! I’ve got an excellent cooking book written by an American, Colman Andrews, Catalan cuisine, (worth buying!) which includes several recipes and offers some explanation on «cocas» and their lore. Here it is, forgive my rendition, I’m translating from a Spanish translation of the English original:

«Coca is more or less a catalan pizza, a flat dough base which admits a wide variety of garnishes, whether sweet or not. (…) The word apparently is derived from the latin coquere, to cook, and it is used no only in catalan but also in the old Oc language of Toulouse and its surroundings.(…) Cocas are different from pizzas not only regarding their typical shape, but also in that cheese and herbs are hardly ever used for garnish. Besides they are traditionally served at room temperature»… Nice cultural touch for this blog, you know it needs it badly. And I add: «cocas» are indeed delicious at room temperature unlike pizza. Mrs. Coca, you’ve got a point there.

I don’t know if the description of catalan «cocas» is valid for another region’s, my information is scarce… mmm, I’d love to undertake a field study. Let me remind you, I’m willing to be taught. And after this cultural addition, it’s time to get to the point. The amounts in the recipe make 2 medium sized «cocas» or one large «coca».

Base dough (adapted from the Thermomix book, with sourdough)

The same recipe with normal fresh yeast and no sourdough:

You can cook the vegetables in the oven while you prepare the dough. Preheat the oven to 190 ºC. Brush some olive oil on the vegetables and put them in the oven on a baking tray. I coat the tray with aluminum foil because the juice the red peppers ooze is really hard to clean. And if some catalan is reading, maybe he’ll kill me: it’s traditional to cook the vegetables on a grill, barbecue or the like, till they are nicely browned and smoked, but… the oven is much easier, ahem. I even wrap the onions in aluminum foil so that they don’t end up too burnt. When the vegetables are cooked and tender, in 30-40 minutes, take them out of the oven and put them altogether in a lidded pan for them to sweat and cool. 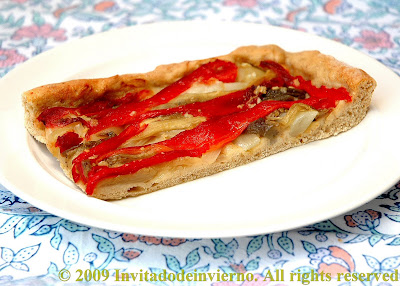 Meanwhile prepare the dough. I mixed a sponge first because my sourdough was past its prime at that moment and I was afraid to add all the ingredients at once, for fear that the dough would not rise sufficiently. Therefore I added the water, milk and 200 g flour to my sourdough and left it to proof for a couple of hours. Once the sponge was bubbling, I added the oil and the rest of the flour. Only 100 g more did the trick. And the salt. And to the fridge with it because I had no time to bake the coca until later on.

After 1 hour in the fridge and another hour tempering, I tipped it on a floured counter, I divided it in 2 (I put one half to freeze) and I flattened it with a rolling pin. It’s traditional to make them in oval shape, with a raised edge to hold the filling and put them in the oven with a peel like a pizza. I normally put the dough in an oven tray, out of laziness… I get rectangular «cocas». And here comes another tricky question since in every corner «cocas» are made somewhat differently: many sources state that the filling is laid on the uncooked dough and then put in the oven, while in other recipes the dough is briefly blindbaked before, like some pies, and then you add the filling and take everything to the oven again to finish the baking. I take the easiest way, I bake everything altogether out of laziness (nice idea you’re getting of me), but I’ve got to try the blind baking of the dough someday. I’m sure the result is going to be different, because the juices from the filling somehow interfere with the oven spring of the dough in the middle part of the «coca».

So let’s add the garnish. When all the vegetables have cooled, peel the eggplants and peppers and separate them into strips with your hands. Slice the onion and tomatos. Start laying the vegetables on the dough. I advise to put the peppers on top for a more colourful dish. In several recipes we are advised to mince the garlic and spread on top of the vegetables before baking. I prefer to soak the minced garlic in 2 tablespoons virgin olive oil for a while and then brush the mixture on the vegetables… yummy (I used 1 clove garlic for half the dough and vegetables, I like it garlicky). Then you add plenty of salt on the vegetables to compensate for the sweetness of both peppers and onion. 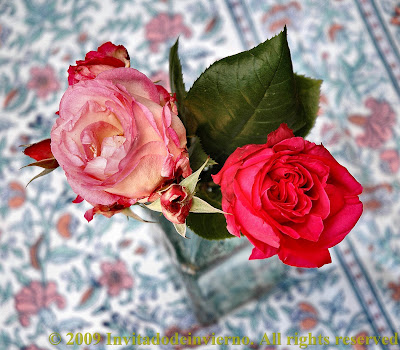 Bake the «coca» in the oven preheated to 210 ºC for 12-20 minutes, baking time depends on whether you use sourdough or not. Mine took 20 minutes to bake. The result was excellent, the dough has a lot more flavour and character than the one you make with the original Thermomix recipe, of course. What I love about «cocas» is that they are equally good the day after and there’s no need to keep them in the fridge, just at ambient temperature (of course not for longer than 2 days, 1 day in warm weather). You can choose to reheat them or not to your taste. It’s a most delicious dish, unfortunately a lot less known than pizza… I vindicate «coca»! The «coca» also exists!