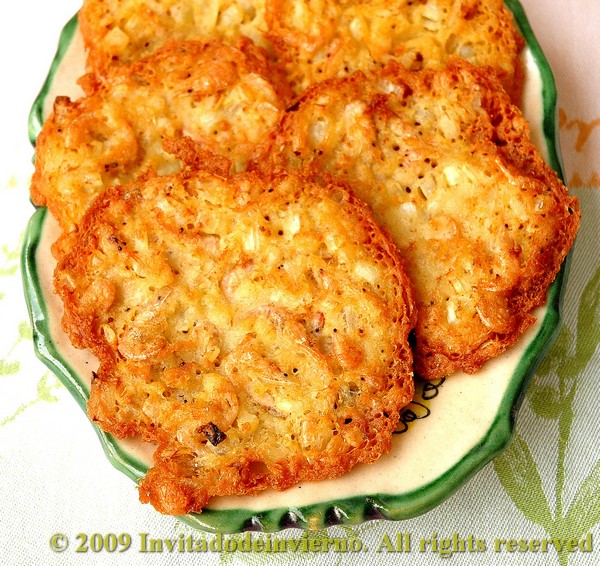 Tortillas de camarones from Andalusia are made with a tiny type of shrimp called camarón and are typical of the Cádiz province. They are delicious with a glass of chilled fino or manzanilla, on a bar terrace…

I’ve got to confess: I’ve never been to Cádiz in my life. I don’t have any relatives in the area. I don’t even have friends from Cádiz. I’ve only eaten tortillas de camarones in an Andalusian restaurant close by. With this I mean that I’m not an expert in the subject. But I’m crazy about them all the same and I admit my crime: I cook them in my own kitchen. Therefore I ask all connoisseurs of tortillas de camarones out there to have mercy on me. Although I’m more than willing to learn and am open to any recommendations for the next time I make them…

Fine, after this apology I can say anything I want about tortillas de camarones… The recipe I normally use was found at the site Pisto y Nopisto. You can find in the Internet long and brainy arguments in Spanish about what bar is the best place in Cádiz to eat the tortillas. Some say it’s Casa Balbino at Sanlúcar de Barrameda and some people even warn you about the impossibility of preparing decent tortillas de camarones out of Cádiz province… because, among other reasons, ingredients are hard to find. Camarones are tiny shrimps that are cooked whole, because it would be impossible to shell them. Even in Spain they are not easy to find everywhere. The same happens with chickpea flour. You can make your own flour with a stout food processor from chickpeas though. Mix thoroughly both flours with the water to avoid any lumps. Then add the rest of the ingredients, mix well and leave to rest for two to three hours. I guess the purpose is the hydration of the flours.

Pour olive oil in a shallow and wide pan to a height of 1-1.5cm and put the pan on medium-high heat. When the oil is hot enough, pour a tablespoon of the batter in the oil. Pat it with the spoon to spread it a bit and get a thin tortilla. At Casa Balbino they recommend that the oil shouldn’t go higher than 80 ºC. According to my experience, that’s the secret for getting uniformly browned tortillas: to cook them on medium temperature, even if it takes long. If the oil is too hot, the edges will brown too soon and the center will be softer and puffier. I like them this way too, but my family prefers them crispy. You can try both ways. As a sidenote, the oil will splash quite a bit, so prepare yourself to make a mess on your range. In my case, I cook and D. does the cleanup… (holding back a smile). Then put in the pan as many tablespoons of batter as you can fit. Flip them over when they are nicely browned on one side. And… that’s all folks. Lay them on a paper towel as you go to absorb some of the oil (yes, they do soak quite some oil) and… just eat them… I like them in any way, even when I burn my tongue or when they are cold… Should I be punished for that?

Last advice: please don’t use any other kind of oil but olive oil for frying these… it would be sacrilege.